Link to the thesis in DiVA.

The field of solid polymer electrolytes (SPEs) used to create safer lithium-ion batteries has been dominated by polyethylene oxide (PEO) since the discovery of its ion-conducting properties in the 1970s. In this thesis, as an alternative, the ion coordination and conduction properties of SPEs based on polyketones, polyesters and polycarbonates are investigated. Instead of having only an ether oxygen on the backbone (like PEO) the functional group in all three of these polymer classes contains a carbonyl oxygen, which is the main coordinating motif on the polymer backbone. The polyesters and polycarbonates do, however, have one or two more oxygens in the functional group compared to the polyketones. This was shown to have a great effect on the SPE properties. The key properties that have been studied in this work are the ionic conductivity, glass transition temperature, degree of crystallinity, coordination strength, and the transport number. The polymers are both studied individually and comparatively.

The polyketone electrolytes studied in this thesis are novel to the solid polymer electrolyte field, and not as established as the polyesters and polycarbonates. The polyketone-based electrolytes have a high degree of crystallinity and the lithium coordination strength is quite high, therefore the ion transport is significantly reduced. Results with a higher salt concentration, however, suggest that with a more amorphous polyketone electrolyte, the transport properties could be significantly improved. The challenge with the polycarbonates is not the degree of crystallinity, as most of the ones studied herein are amorphous, but instead the high glass transition temperature. They are thereby restricted by the low degree of segmental motion present. This problem could not be solved by lowering the glass transition temperature by the addition of side-chains, as the side-chains instead block the pathway of the lithium ions. A positive aspect seen in the polycarbonate-based electrolytes was the high lithium transference number, which is significantly higher than both the polyketones’ and the polyester’s. The polyester is also semi-crystalline; the degree of crystallinity can be reduced by the addition of salt or nanoparticles though. Synthesising a polyester-polycarbonate copolymer is also an option to create an amorphous polymer. The polyester is somewhat of a midway between the polyketone and polycarbonate, both in its molecular structure as well as in its physical and ion transport properties. It does, however, show the highest ionic conductivity out of the three as it has a rather low glass transition temperature and not too strong ion coordination.

This work highlights the physical, coordination and conduction properties found in carbonyl-containing polymer host materials. Even though the polyketones, polyesters and polycarbonates are structurally quite similar, their properties can vary significantly. They are, however, all likely candidates for tomorrow’s solid-state lithium-ion batteries. 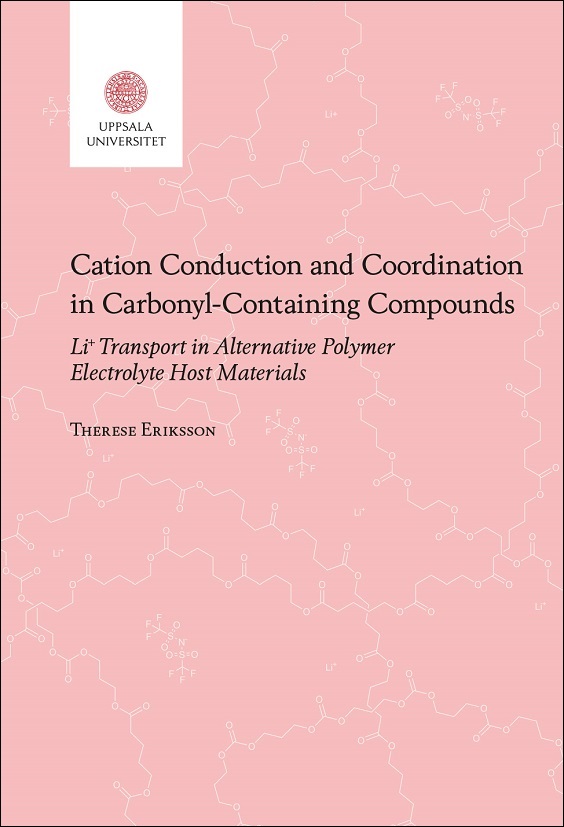