Tim Fulford: “Empire of Skulls: Headhunting and the Discourse of Natural History in the Late 18th Century”

Skulls were the ultimate hard ‘facts' upon which Enlightenment natural historians built a racist pseudo-science—a hierarchy of races in which Caucasians appeared at the top and black people at the bottom.  In this talk I shall examine the practice of collecting the skulls of indigenous peoples as a consequence of an inherent feature of Linnean and post-Linnean Natural History—the drive to gain scientific power by building a universal classification of phenomena organised by agreed procedures of mensuration.   I shall investigate how European headhunting went hand-in-hand with British colonialism,  outline the racial theories constructed upon this ‘evidence’ and critique the biased methods by which the skulls were interpreted as revealing indigenous people’s inferiority.   I shall focus on the headhunting network that centred on Sir Joseph Banks and linked two of the foremost instructors in Natural History — the Gottingen professor J. F. Blumenbach, whose lectures and manuals educated generations of Natural Historians, and the London anatomist John Hunter, whose lectures and demonstrations placed native peoples nearer to the apes than Europeans.

Tim Fulford has written many books and articles on Romantic-era literature, science and culture. Among his current projects are an edition, for Cambridge UP, of The Letters of Thomas Beddoes. He has previously edited, with Sharon Ruston, the letters of Humphry Davy, for Oxford. Before that, he published, with Cambridge, a co-written monograph on science and literature in the early British Empire, focusing on the work of Joseph Banks. This was entitled Bodies of Knowledge. His monograph on Wordsworth’s later poetry, Dialogues with the Dead, will be published by Cambridge University Press in 2023. He runs the website dedicated to the poetry of Henry Kirke White, https://kirkewhitecom.wordpress.com/.

Illustration: Details from John Hunter. Painted by John Jackson in 1813, after an original by Sir Joshua Reynolds, who exhibited his painting at the Royal Academy in 1786. Public Domain. 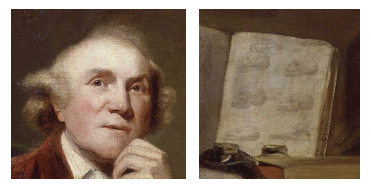