Drawing from the transnational reception of the ideas of Deutschtum / Germandom in British Bengal, Arnab’s doctoral dissertation shows as to how Interwar Germany had reshaped the Bengali understanding of nationhood; and why these conceptual transferences were translated in creating an alternative version of political action and political community within the anticolonial rhetoric of late colonial British India. In broad terms, Bengali anti-colonial intellectuals and activists who identified with Germany and ‘Germanism’ were fascinated by the idea that Germany and India shared a common ‘Aryan’ root. Most of them located this common root in the idea that there was a sharp divide between the ‘Aryan’ and the ‘Semitic’, a linguistic and racial doctrine that was well established in Indo-European Philology (which the Germans called Indogermanisch). In that context, what did it mean to learn the so-called indogermanisch German language in Interwar Bengal and how did impinge upon the geopolitical questions of Bengali nationhood? Answering these questions, this talk presents the findings from Arnab’s doctoral dissertation-project, titled as “In Search of an Alternative Europe: Germanism and Continental Europe in the Bengali Imagination, 1919–45.”

Bionote
Arnab Dutta is a final-year PhD candidate of Modern and Contemporary History at the University of Groningen, the Netherlands. Earlier, he spent an academic year (2019–20) as a visiting doctoral student at the Department of History of Science and Ideas, Uppsala University. 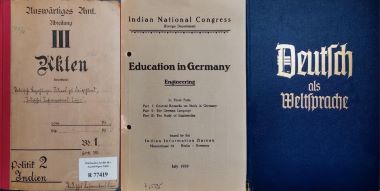